Rediscovering the joy of music 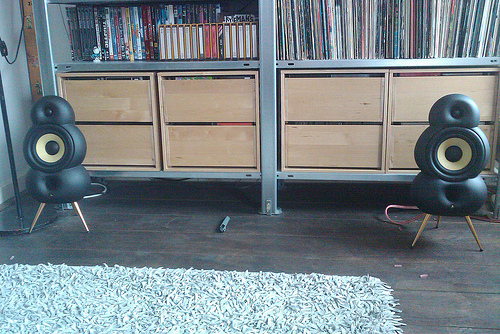 A set of awesome Podspeakers

I don’t know if you can relate to this, but something odd happened when I got really involved in music. I kinda lost interest in great music while I was busy being ‘in the music industry’. Argh!

Ages ago, when I first started going to concerts, I was one of those kids who would try to get as close to the stage as possible. I’ve seen quite a few famous musicians up their nose (or skirt) that way, and was mightily impressed most of the time. Mind you, no dancing was involved as we were all crushed against the barriers bij the crowds behind us. Which was fine by me, I was kind of shy that way.

Once I started playing in bands myself, I would regularly state that musicians don’t dance. Because it wasn’t cool. And I would often find myself mesmerized by the sounds, skills and performance by the band I was watching, trying to ‘get’ how they did it. But I could still enjoy music, both live and recorded. As a matter of fact, I remember some instances where I actually got chills down my back during concerts, and the odd sensation of tears welling up every now and then when the band dit extremely well.

Music Industry people have no taste of their own

As I got involved with Lopend Vuur (the Dutch indie music blog that Ard Boer and I started in 2006), my focus shifted from creating my own music to finding interesting, engaging music that was ‘worth our time and attention’ on the blog. I adopted a new set of criteria, apparently. Criteria that were more geared towards how others would appreciate the music we selected, I presume. I hardly noticed, apart from a tendency to want to go out to see bands live less often than before. But that could also have been caused by getting older, getting into a relation, getting involved in a more intense work life…

I did joke about it to some people. Whenever someone would ask my opinion on the latest hottest bands, I regularly said that I knew all the local bands, but none of the international bands that they were referring to. When we founded New Music Labs, and my music involvement became even more businesslike, it even got to the point where I lost interest in a lot of the ‘classical’ albums. Stuff that I had liked all my life went into a dark little corner of my mind.

I did enjoy some new music, though. My appreciation for regular guitar bands waned, but my interests in Rap, Drum ‘n’ Bass and even Dubstep increased (but I still wouldn’t dance to it).

Happy accidents do happen, even to musicians

A lot happend, in 2010. New Music Labs evolved, changed gears and Ard and I decided in the summer of 2010 that we would leave him at the steering wheel. I would take a step back and manage the shareholder’s interest for De Ondernemers BV (my main company. A difficult step, because I did (and do) love the fact that I was able to start a company about music. But Ard is the real dealmaker, and New Music Labs will undoubtedly excel under his guidance.

The other thing that happened, though, were Podspeakers. As a present for my 40th birthday, I got a wad of money that allowed me to finally complement my home hifi-system (NAD) with a pair of decent speakers. And I was rewarded with a whole new experience, one (I realized then and there) that I had missed for some time: awesome music!

Since then, I have once again enjoyed a number of great live shows, and listened to a lot of great music, from CD or through Spotify. And last week, Jeff Buckley brought tears to my eyes. The curtains have been lifted.