What about the ‘protected’ format of Pecha Kucha Nights? 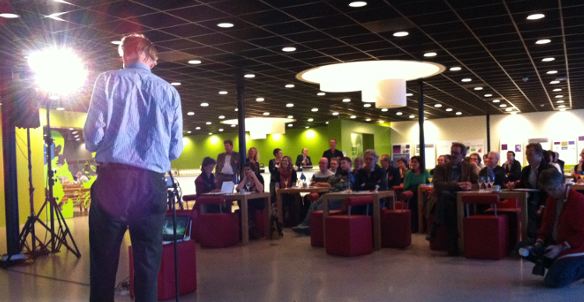 “If it requires a license, it is not an open format!”

I was amazed by the response I received on that particular bit of information. Since the theme of this particular edition was “Social Innovation” (Dutch link), I anticipated enthusiastic comments regarding the fast pace and the easy way that Pecha Kucha allows a series of people to quickly present their projects and then interact directly in the breaks and afterwards.

Instead, a few people came up to me and said that they objected to the fact that a license is required to put on a Pecha Kucha Nights. They claimed that that was old-fashioned, and couter to the open atmosphere and attitude that Pecha Kucha Nights promoted.

I think they were projecting their own (old-fashioned) rules and expectations on a new way of sharing successful ideas. They associated ‘license’ with restriction, not ‘setting the stage for successful growth’.

It requires a license, because you have to commit to a shared vision

As anyone can read, Pecha Kucha Nights is very open about what it is that they want to see happen, but this is the most important to me:

City organizers are really seen as stewards of the PechaKucha spirit, not owners!

So the license acts as a token of your commitment and promise to do it ‘the Pecha Kucha’-way. It is called a ‘handshake’ for that reason.

What do you think?

Do you think this is the best way to go about creating a uniform, globally recognizable event? Does utilizing a license appear counterintuitive in this day and age of open sharing.What are your pro’s and con’s? Let me know in the comments!